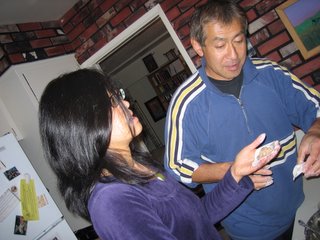 rita and tamotsu assembling gyoza. many friends and children participated in the making of these dumplings. there were a lot. after all was done, hiromi made a round of elvis onigiri (onigiri grilled in butter). i was too full to even have a bite, which says a lot because i love those things. we watched the hockey game (vancouver vs. calgary) as we ate. it was hard to know who to root for, though i admit my loyalties fell to calgary. afterwards we went to the opening of a show by an artist called liam wake at a venue called “blim”, run by lenny’s friend yuriko iga. quick stop for a drink (or rather, some tea) at a new place at main and 10th called “habit.” it reminded me distinctly of husky house with its orange seats, 70s nouveau-retro post-soviet chic tiles and forest scene wallpaper. where were the pancakes with bad strawberry sauce and whipped butter? afterwards the die-hards went dancing. i went home to bed.