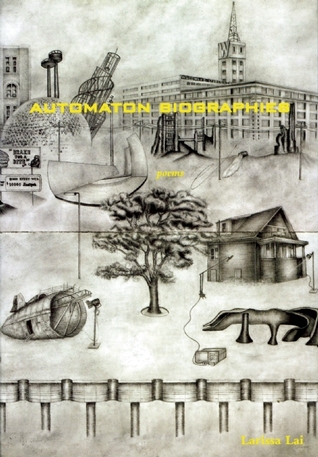 With an ear to the white noise of advertising, pop music, CNN, biotechnology, the Norton Anthology of English Literature, cereal packaging, and MuchMusic, Lai explores the problem of what it means to exist on the boundaries of the human.

The books consists of four long poems: "Rachel," a meditation in the voice of the cyborg figure Rachel from Ridley Scott's film Blade Runner and its source material, Philip K. Dick's Do Androids Dream of Electric Sheep?; "nascent fashion," which addresses contemporary war and its excesses; "Ham," which circulates around the chimpanzee named Ham sent up into space as part of the Mercury Redstone missions by NASA in the 1960s and later donated to the Coulston Foundation for biomedical research; and "auto matter," a kind of unfolding autobiography told in poems.

Ambitious, eloquent, and deeply personal, these poems taken as a whole are a personal and cultural history that jostles us out of our humanness and into our relations to animal, machine, language, and one another.

In Automaton Biographies, Larissa Lai machine-tools the poem as a mode of narrative invention into a neuro-spatial surveillance where words become the heat tiles of re-entry tumbling through atmospheres of cyborgian desire, cosmic memory, prosthetic lament, and the dictation of identity. Poetry like this is just what we need for the invasion; writing that honours the debris of the imagination while it sustains the space labs of attention.
―Fred Wah

Part exoskeletal enjambment, part shared soft biology, Automaton Biographies wends through creative industries and uncommon commons, picking up the shards of both our latent futures and our Polaroid pasts. Larissa Lai jacks into a sound system here that is already spinning everything from White Zombie to Elton John. Her stanzas, staccato and severe, deftly kern our ears to new iTunes and weTunes, creating poems that are simultaneously partial, powerful, and ever-emerging from the post-industrial landscapes where new technologies and alienated labor continue to collide.
—Mark Nowak