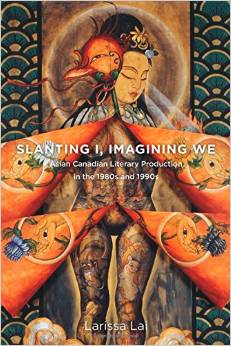 The 1980s and 1990s are a historically crucial period in the development of Asian Canadian literature. Slanting I, Imagining We: Asian Canadian Literary Production in the 1980s and 1990s contextualizes and reanimates the urgency of that period, illustrates its historical specificities, and shows how the concerns of that moment—from cultural appropriation to race essentialism to shifting models of the state—continue to resonate for contemporary discussions of race and literature in Canada. Larissa Lai takes up the term “Asian Canadian” as a term of emergence, in the sense that it is constantly produced differently, and always in relation to other terms—often “whiteness” but also Indigeneity, queerness, feminism, African Canadian, and Asian American. In the 1980s and 1990s, “Asian Canadian” erupted in conjunction with the post-structural recognition of the instability of the subject. But paradoxically it also came into being through activist work, and so depended on an imagined stability that never fully materialized. Slanting I, Imagining We interrogates this fraught tension and the relational nature of the term through a range of texts and events, including the Gold Mountain Blues scandal, the conference Writing Thru Race, and the self-writings of Evelyn Lau and Wayson Choy.

“Slanting I, Imagining We is a compelling and much-needed reappraisal of the formation of Asian Canadian literature by one of Canada’s most accomplished and versatile writers and public intellectuals. Novelist, poet, and activist Larissa Lai’s prose is fresh, readable, and engaging. Her discussion of the anti-racist work done by coalitions of people of colour, First Nations, and queer communities in the 1980s and 1990s reminds us of what is at stake in naming, representation, and nation building; of how the ghosts of the Vancouver riots of 1907 haunt the ‘Too Asian’ debates of 2010. Her critical readings of stories and poems by such writers as Garrett Engkent, Hiromi Goto, jam ismail, Rita Wong, Margaret Atwood, and Dionne Brand are illuminating, revealing the ways colonialism, appropriation, systems of categorization, and power continue to generate and construct identities and bodies in our globalized and digital world. Insightful, absorbing, and challenging—an invaluable addition to Asian North American, Canadian, gender, and cultural studies.”